Sorry, I meant we collected No Problem's crew on Friday morning from Hillmorton Locks and loaded them all up to take back to MR for a long weekend. Via, of course, the Nether Heford butcher and the Bugbrooke pet shop. 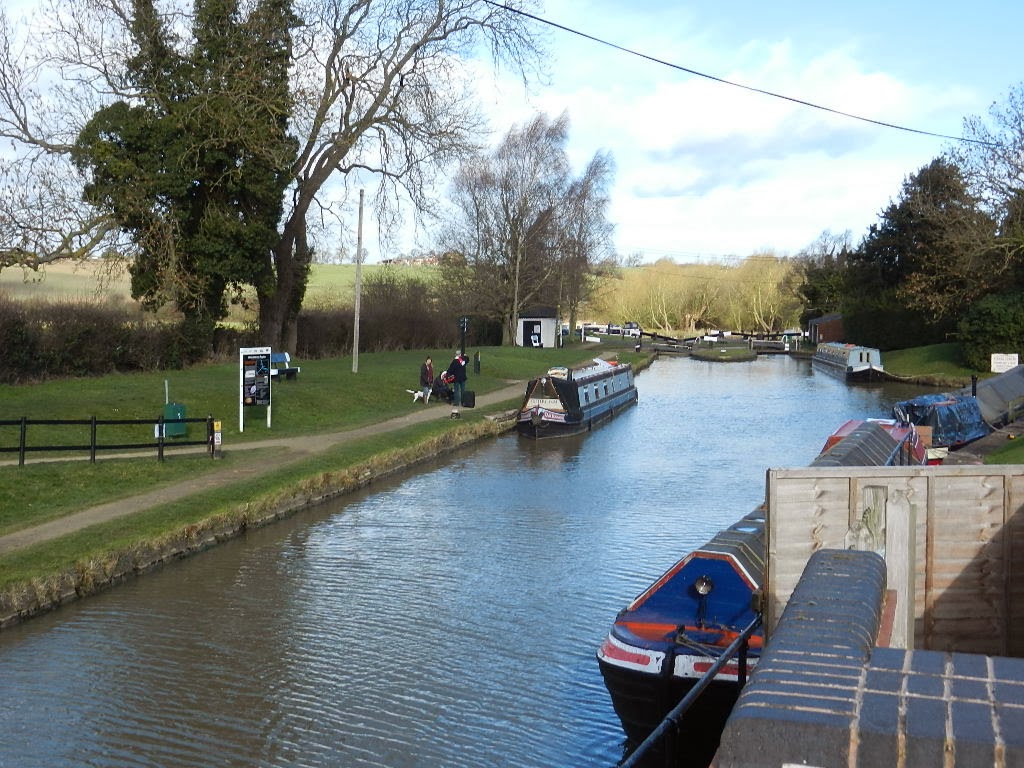 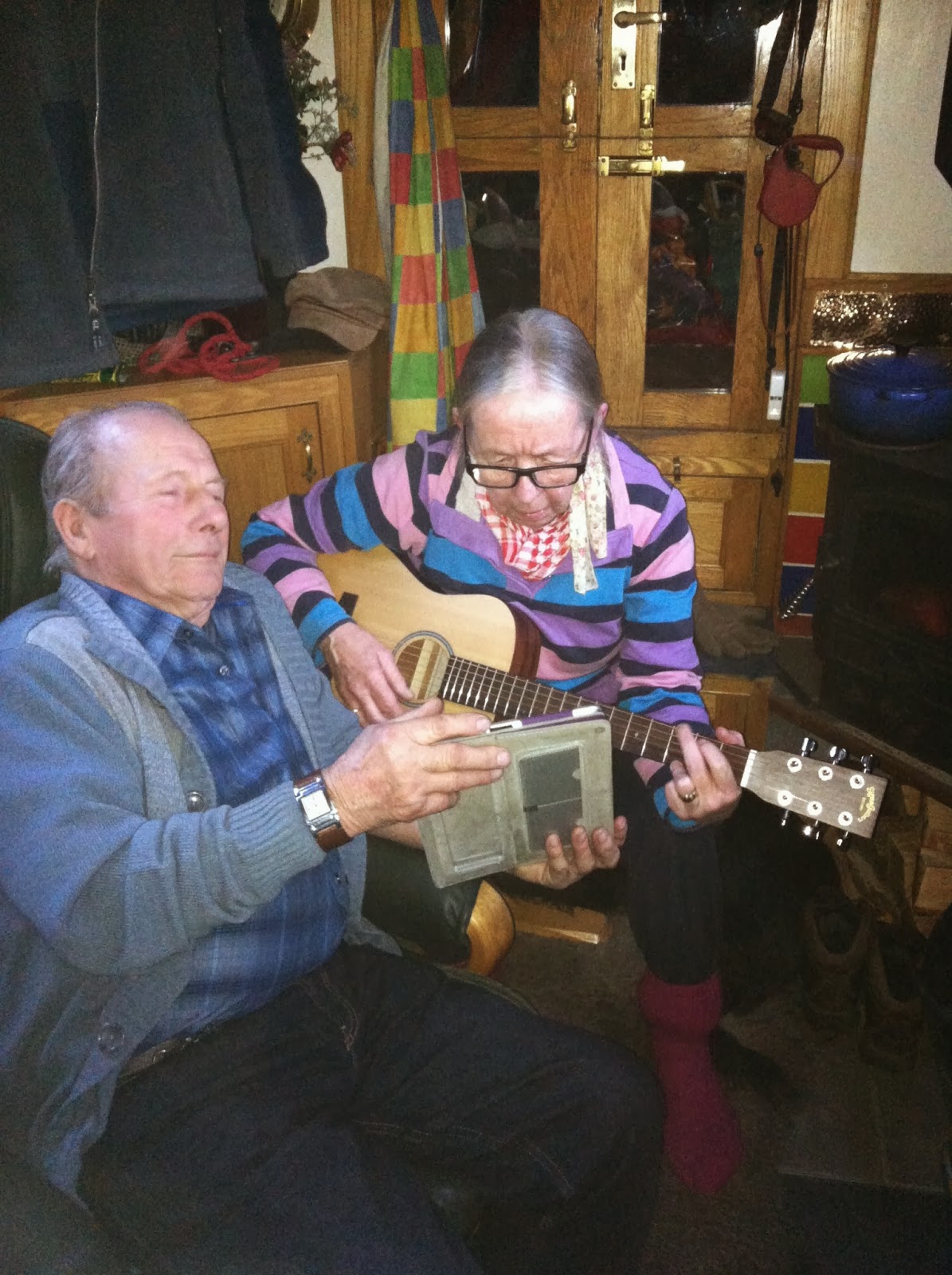 Not one of us remembered to take a proper camera to the gig - so this pic is all I have (probably just as well) and G did a great job with the band until the early hours of the morning.
When we, eventually, returned to MR G broke the fire glass so we had no overnight heat and the airbed covering Sue and Vics bed collapsed during the night, so they kept rolling into the middle (likely story, but I'll believe them). Neither incident drove them ou put them off so we replaced the glass, re-lit the fire and fixed their bed! 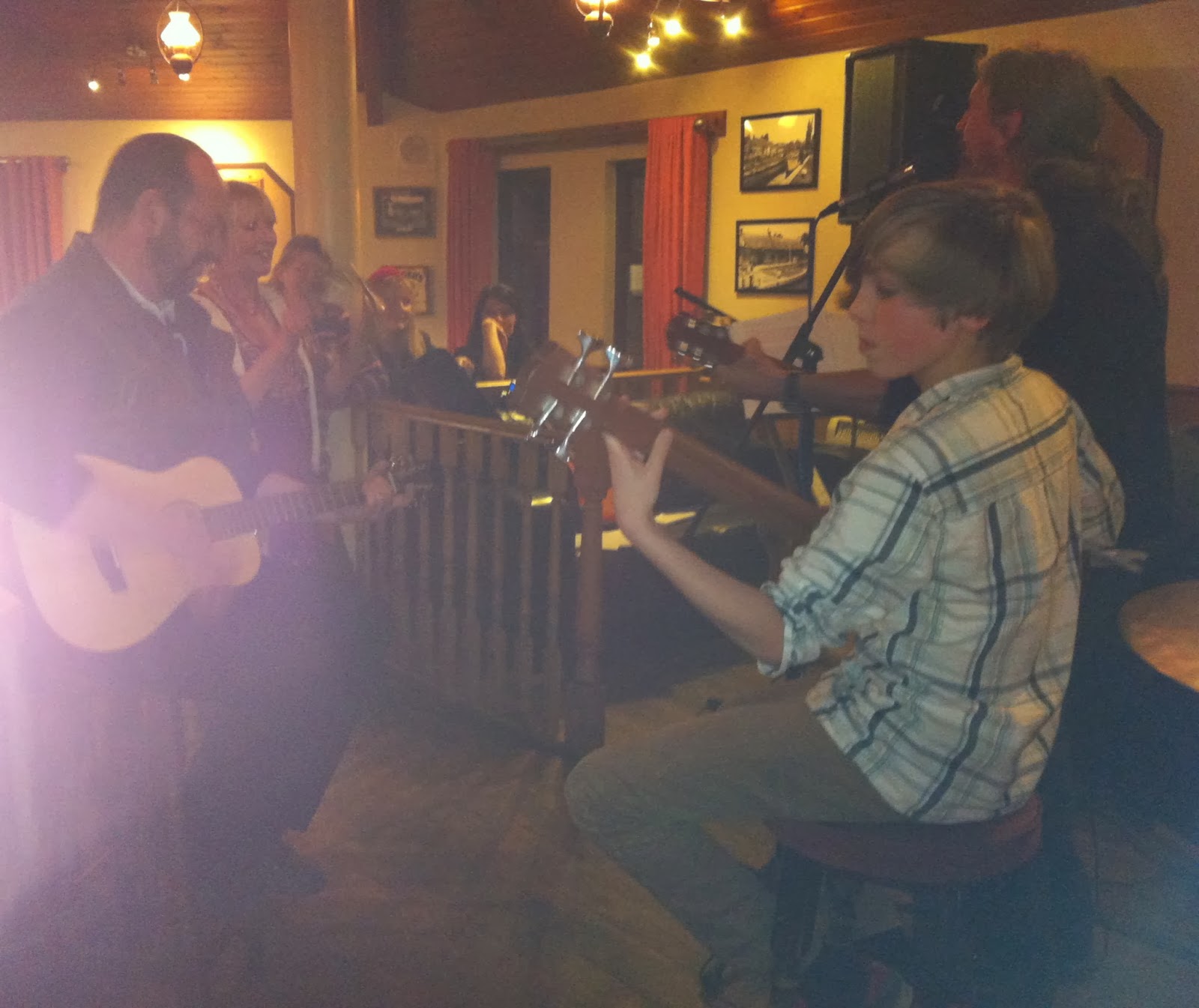 When we arrived at Stoke Bruerne we moored on the '2 day' mooring by the tunnel and I met the warden who told us not to worry about moving until Monday as there was no-one else about. On Saturday morning, a different warden with a snotty attitude and letter chucked a, "you've got to move tomorrow" message into our bacon and eggs. Charming!
So Sunday morning we moved down 2 locks onto the 2 day/7 day (14 in winter) to find all the available mooring taken up by fisherman having a match

You can imagine how delighted to see 66 foot of MR arriving can't you? 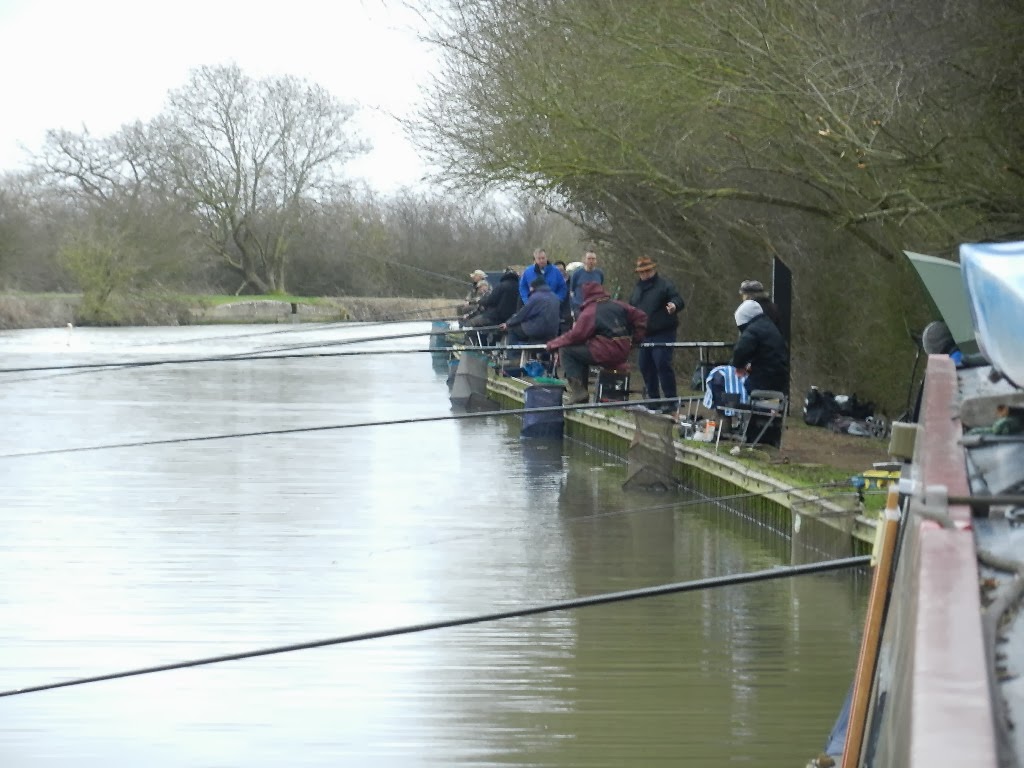 Fortunately the boat behind moved back and we sort of stuffed ourselves in - quite tricky in the strong wind. So we continued with the Sunday dinner after a pint. 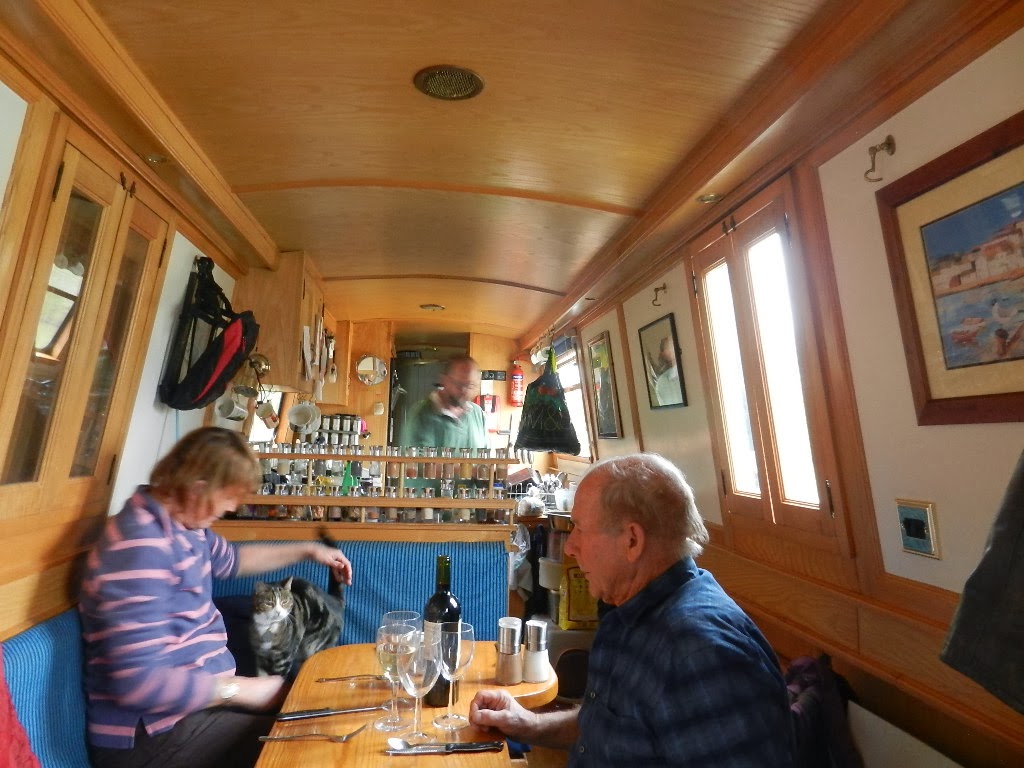 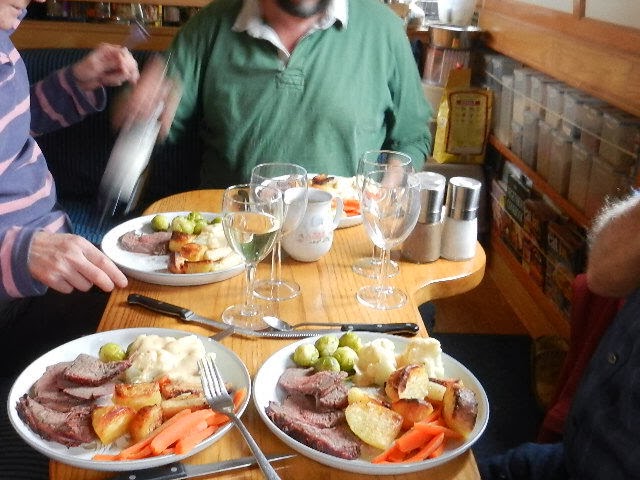 Baxter managed to grab 'his' chair back when Sue lent forward to stroke Penny. I have to say all four dogs and the cat behaved impeccably - shame about the 4 adults 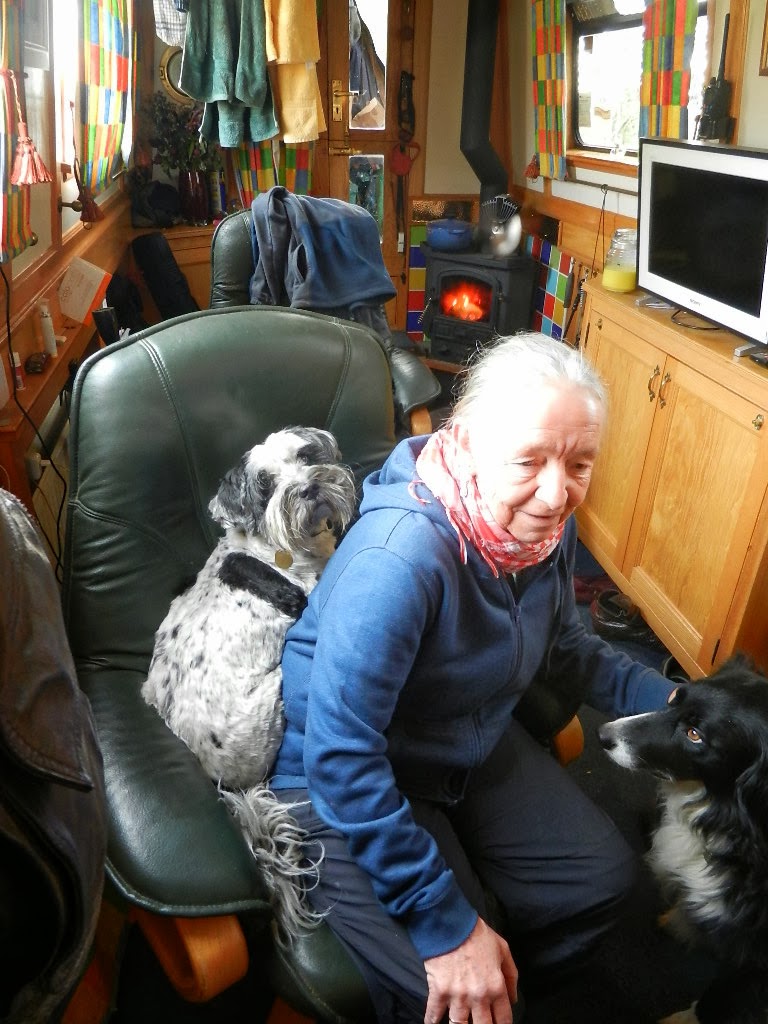 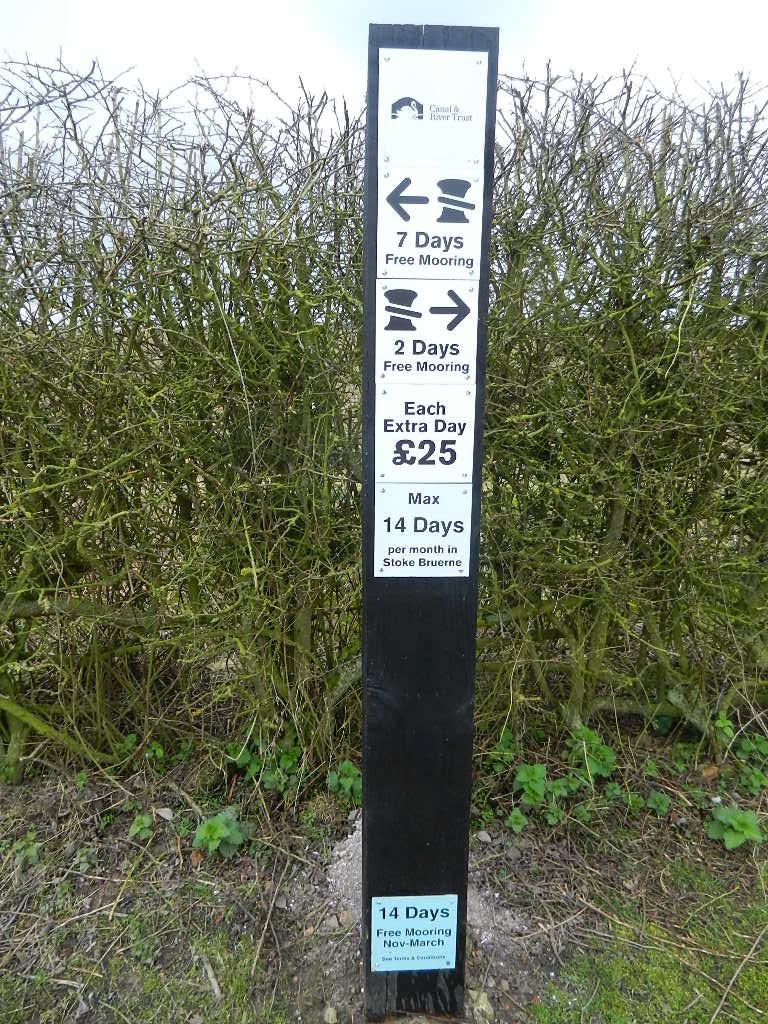 Below all 7 locks ALL YEAR round you have 2 day and then way down even further where this boat is it is 14 days. Not surprising that Stoke Bruerne is empty and the businesses are complaining -whilst boaters themselves might not contribute hugely; it is their presence that (used to) bring in the gongoozlers 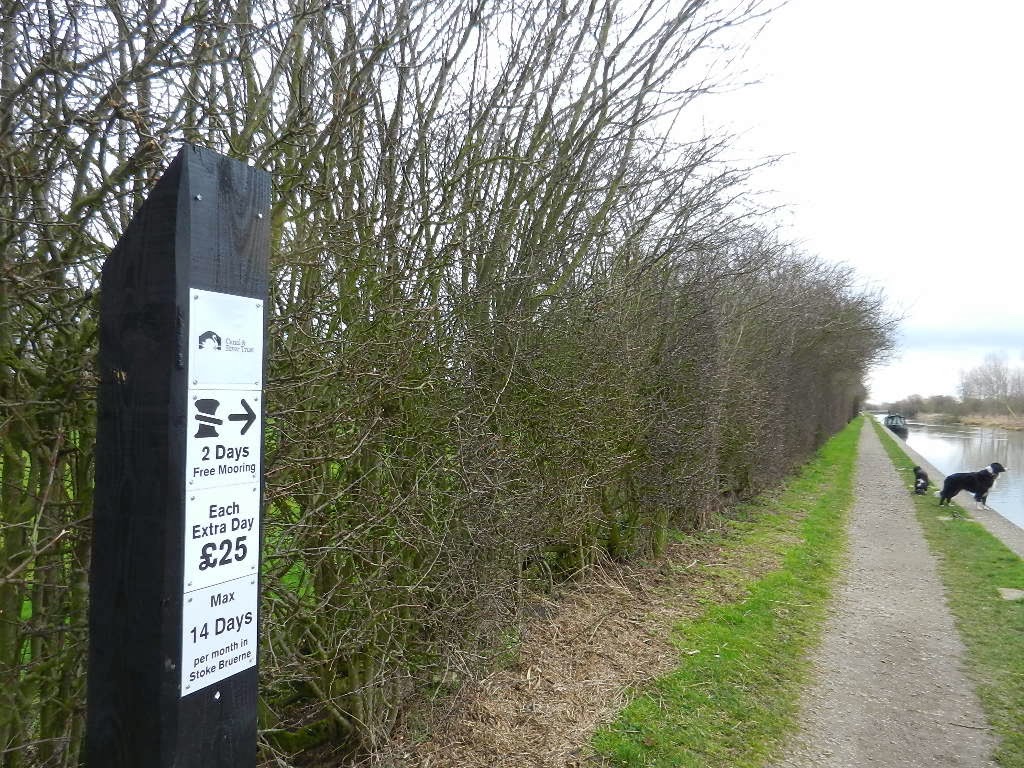 We had a brilliant time and, as always in their company, spent most of the week-end in fits of giggles.
Posted by Unknown at 22:36