Are they keeping it simple because there is too much wind?

The new outer Harbour at Great Yarmouth having its cranes delivered, only two are for here, the other two are being onward shipped to Egypt.

Oldest Windmill on the Broads set beside the River Bure

Matilda Rose is having her bottom Blacked

We have left 'MR' at Debdale Marina for three weeks, whilst we go galivanting in Norfolk, sailing and generally enjoying ourselves. Whilst we are away 'MR' is having her bottom blacked to repair any damage we did whilst breaking the Ice this last winter.
Hopefully we shall have some interesting photos later, once we get on the water, where we belong.
Posted by Unknown at 19:13 2 comments:

This post box photo is for Lesley & Joe on NB Caxton

Had a really nice walk today in varied scenery, but had to keep the dogs on leads for most of it due to cattle. They don't believe in Artificial Insemination round here, it's all bull.

Came home and G made a butterscotch tea cake & I made dinner. What a dull pair we are today.
We'll probably move tomorrow, but we'll have to go down the Welford Arm & back, just to get water. I wouldn't have bothered otherwise as I've already walked it twice. I want to walk into North Kilworth & to Husbands Bosworth, but we wouldn't have enough water to sustain us to Foxton Locks if we don't go down the arm. Could do with another water point by the HB tunnel really.
Anyway, boring we may be, but the pictures are pretty & we'll sleep well tonight. Happy chappies we are.
Posted by Unknown at 20:03 1 comment:

Holed up for the bank holiday.

Didn't travel far yesterday, watered at Yelvertoft and moored up about a mile & a half through, nicely in the middle of nowhere and away from the 'motorway madness' that is a bank holiday weekend. Trundling along the tow path with the dogs, I came across acres of 2ft high polythene & pontificated as to it's purpose.

Eventually I came across this sign which, one assumes, is the reason for the polythene, but I'm still none the wiser as to why - there was no resemblance to pontoon layouts. It is certainly going to be huge and I can't help but wonder how the system will cope, at busy times, given it's close proximity to Crick Marina. Between 35 & 40 NBs passed us heading North today - only 2 passed us heading South. Where will all those boats moor tonight, let alone when another vast Marina joins the flow? I might just have to walk up and take a look tomorrow - maybe someone's invented mutli storey NB parks.

We had one of these for dinner tonight.
I keep trying to tell you how I came to be sitting on a shiny red Ducati 748 on a shiny Steve Hudson NB called Taurean, but I typed it out 3 times yesterday, and saved it, and each time I tried to publish it, two-thirds of the story was missing! So now I'm bored with repeating myself (I don't know why really, it doesn't usually bother me) & you are just going to get the short version. I think I must have typed it in invisible ink (we had such fun with that stuff when we were kids). It's a shame you'll never get to read the full, unexpurgated version - it really was the funniest, cleverist piece of writing you'll ever have read. Never mind, the important thing is that if anyone sees Paula and John on Taurean heading down the Grand Union towards London, please refer them to our blog as we were having such a good time that we forgot to exchange E mails and have no way of getting in touch (although it could have been deliberate on their part!).

When we arrived at the bottom of Watford locks, this old barge

thingy had come away from it's moorings. Leaving G trying to re-capture it, I set off up the flight to report in to the lock keeper as instructed. I mentioned the barge thingy blocking the bottom lock, 'not my problem, Section 8'. Sorry pal, if it's blocking your lock flight on the run into a bank holiday weekend, it's just become your problem. Obviously didn't get a great degree at charm school.

After we helped him tether it, he was completely different and we had a good laugh & a good chinwag as there wasn't another boat about as we went up - in fact we sat in the top lock for a good half hour gassing with Mrs lock keeper.

The interior picture was my rubbish attempt at trying to take a picture of one of the 2 boats passing us in Crick Tunnel (it frightens the shit out of me) - probably 'cause I was breathing in in an attempt to make us thinner.

We moored up just through so that I could don a rucksack and get myself drowned humping food back from Crick Co-op having forgotten to provision at Braunston.

It seems strange re-visiting this area and walking it without the company of Lesley, Fletcher & Floyd from NB Caxton-it's certainly warmer and drier than it was when we hoofed it along here in December.

We carried on for a bit & moored by Crick Marina, where this, very territorial, 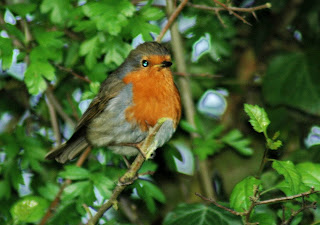 Robin was very angry with Daisy -who was, in fairness, ignoring him- and making so much racket that we had to fetch her in to shut him up, just so we could hear ourselves think!
Posted by Unknown at 16:46 No comments: