Yesterday we knew we were going up the Northampton Arm back onto the canal system today.
We also knew we would be parting company with Vic and Sue soon so we thought we would go out for a good meal (on our 2 for 1 Tastecards) at the Vineyard in Northampton as a bit of a farewell celebration (don't bother; ok at half price but cold plates...grrr).
Before we went out I did remind everyone that we had 18 locks to do in the morning (and we've been off the system and pottering around with the odd electronic lock or two for the last 14 months) so we didn't want to be getting bladdered and staying up late.
How very sensible of me.
Did any of them listen to me?
Did they hell.
Did I listen to me?
No.
So off we toddled (or should that be staggered) this morning; through the town lock and onto the town moorings for a Morrison shop. A certain fellow traveller was heard to mutter that she couldn't ever look a bottle of Bacardi (other brands are available) in the eye ever again and, remarkably, we reached the bottom lock 15 minutes ahead of schedule. This was important as Pip and Roger (NB Windsong) and Kevin Too (The Other One) were coming out to help us lock up so there was no slack in the schedule. We were in front ( (dodgy) coins had been tossed the night before) and confronted with my first 'proper' lock in 14 months it took me 3 attempts to assemble the right 'anti-vandal' equipment. Feeling rather foolish but safely through and re-setting for Vic and Sue they came over on the radio that they were a dog short!!!!!!!!!!!!!!!!!!!!!!!!!!!!!
Penny had wandered off at Morrisons and wasn't on board.
Sue went tearing back whilst we moored up and we were just about to return to help the search when Sue phoned through to say that Penny was lying on the path where the boats had been moored with a small worried attentive audience.
Situation recovered we continued to the next lock where we tried to take the top gate out as we couldn't put the engine into reverse - prop foul. Bow hauled her out and locked No Problem through and they too had a prop foul. They were quickly fixed and we sent them on their way as we (that's the royal 'we') had this 'little' lot of wire to contend with. This is about half of it! 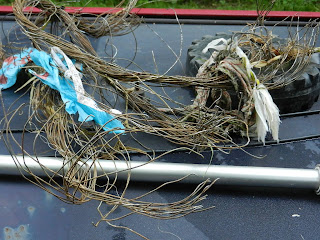 With all the stuff we have on board to deal with such problems, this still took about an hour and a half for G to sort - by which time his hands were dripping blood and he was frozen to the marrow 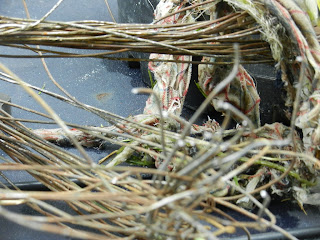 To make matters worse, I'd wandered off to walk the dogs and himself got his head stuck down the weed hatch! Vic paid 3 visits to that part of NPs anatomy today - I'm sure Sue will give their take on the day later if she can stay awake. We eventually caught NP plus Kevin Pip and Roger up when they stopped for lunch. Pip and Roger had to leave shortly after as a wet and filthy (playing with Penny) Ozzy had an appointment with the dog groomer - bet that didn't go down well! 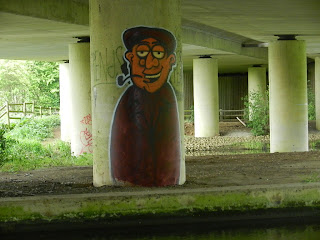 I loved all the 'murials' we passed 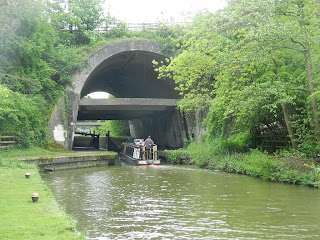 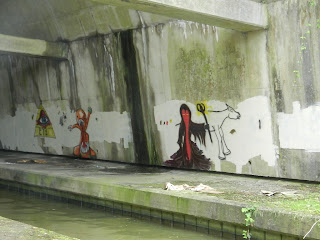 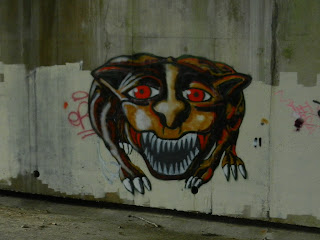 and, it might sound crazy, but I had a really lovely day - the company was brilliant (great to meet Kevin Too - I felt I already knew him after all the blog comments), the exercise was good and the time flew by.

NP in the top lock 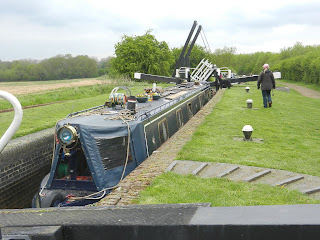 I'd really dreaded coming back to narrow, muddy waters but so far so OK 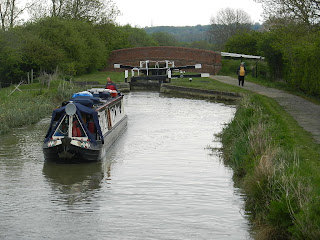 PS We seem to be moored on the route of the local hire boat companies 'let's take you down and show you how to wind' trip. Oh well .. it had to happen; at least they are doing it slowly with their instructors' on board.