Yesterday we had an e-mail from Kevin Too and Harry to say they could drop by this morning and a 'phone call from Kaz to say that most of the grandchildren were going ice skating and would we like to go and join them. We had already recovered the car and arranged to drive across and meet Pete and Sally (my old mate and post lady) for lunch half way between us and their coastal location in Norfolk at March. It was about a 70 mile round trip each and we had a great time with a nice lunch at Mama Mia above the town moorings. Sooo sorry to miss you Kevin and I would have loved to go skating Kaz and kids.... no 2 buses...grrr

So; between my last blog on Monday and tonight we've, inexplicably, had no internet signal. G caught a couple of buses to collect the car and fetch it out to Weedon Bec on Tuesday, because Monday night Baxter had another 'episode' just like the one in September and we thought we would need the vet. We blamed the last episode on Muttley having a go at him and I now believe they are minor strokes brought on by stress - I believe this one was due to the noises inside the boat whilst I was stuck on the bottom and touching lock gates due to a lack of water in the pounds impeding my steerage (that's my excuse and I'm sticking to it!). They were inside the boat on their own and these noises are very loud inside. Normally they are out on the bank locking with me or out on the back deck - they wouldn't normally be inside on their own. Baxter went down flat again but completely recovered by Thursday. There are lessons to be learnt here and we need to keep him stress free as he gets older. 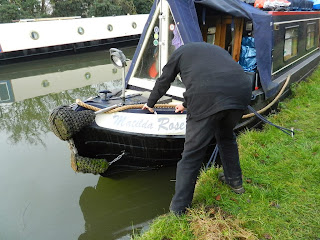 I blogged earlier about the problem of putting our boat name (French requirement) on our 'flared' bow flares - this is our solution. We think it's a good compromise without forking out even more shed loads of money 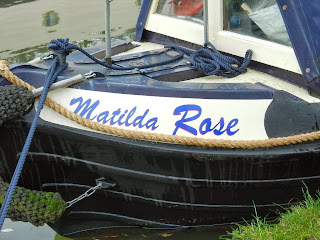 Wednesday, whilst I nursed cuddled Baxter, Graham had a rather exhausting but lovely day babysitting and Thursday we toddled down into the village for a pint and a bit of shopping - really not at all impressed with the general attitude of the staff at the Plume of Feathers which has been taken over by Everards brewery although they are dog friendly. We didn't stay for a second pint and the previously fabulous greengrocer shop (relocated) didn't know what variety of potatoes they were selling. No pastry for more mince pies in the village shop either. The locals are all still lovely but this place, to me, has lost it's pizzazz. Perhaps it's just me. 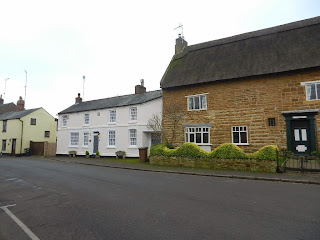 Yesterday I managed to get us out for a, much needed,  proper long walk - pictures won't load but Baxter full of it; such a relief to see him back to full health again
Posted by Unknown at 00:09