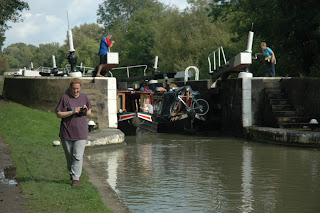 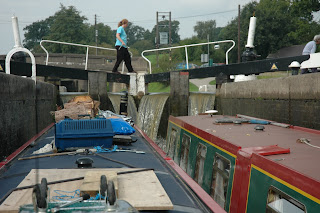 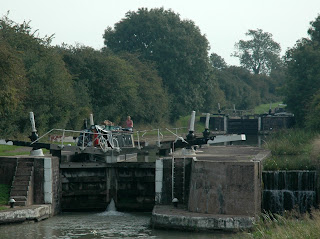 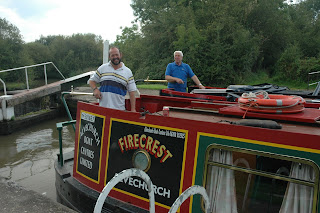 Amazingly, Hatton flight went according to plan (only quicker!). Left at around 9am and, with 6 of us to drive 2 boats, work 21 locks, mind 2 babies, 2 dogs, pick blackberries, no rain and the cats asleep, the whole lot was acheived in 3 hours with a great deal of fun-watered & bacon buttied at the top and moored up beyond the tunnel for blackberry & apple crumble & drinks at a very respectable hour at a mooring with fabulous views & open spaces beyond bridge 61 we're still there now! You will note from the above photos that the crew were very flexible about who did what on what (but I think Graham was quite pleased to get MR back --when he'd done his stint on the lock gates-& was full of admiration for the way Jacquie handled the somewhat recalcitrant hire boat) Really did have to say goodbye to the gang this time, but have a strong feeling that we will see them again. Since they left am yesterday we've just been enjoying this mooring & a little sun. Great walks for the dogs & Daisy off bridge 62 ahead, some much needed housework has been done & even a little painting & fishing. Probably moving on tomorrow but reluctant to leave what is probably one of my 3 top moorings-loads of water but running short of milk & fresh veg (& wine after our recent social period!!!!!!). Top left photo shows a nice friendly lock without any requirement to fill it by opening paddles! It shows just how much water is still about even after several dry days.

Have seen a lot of a boat called "Yesdear" since last Thursday-ish which gave me a brilliant idea for one day a week where all Graham is allowed to say is..........hold that thought for another day-my roast lamb awaits
Posted by Unknown at 16:16